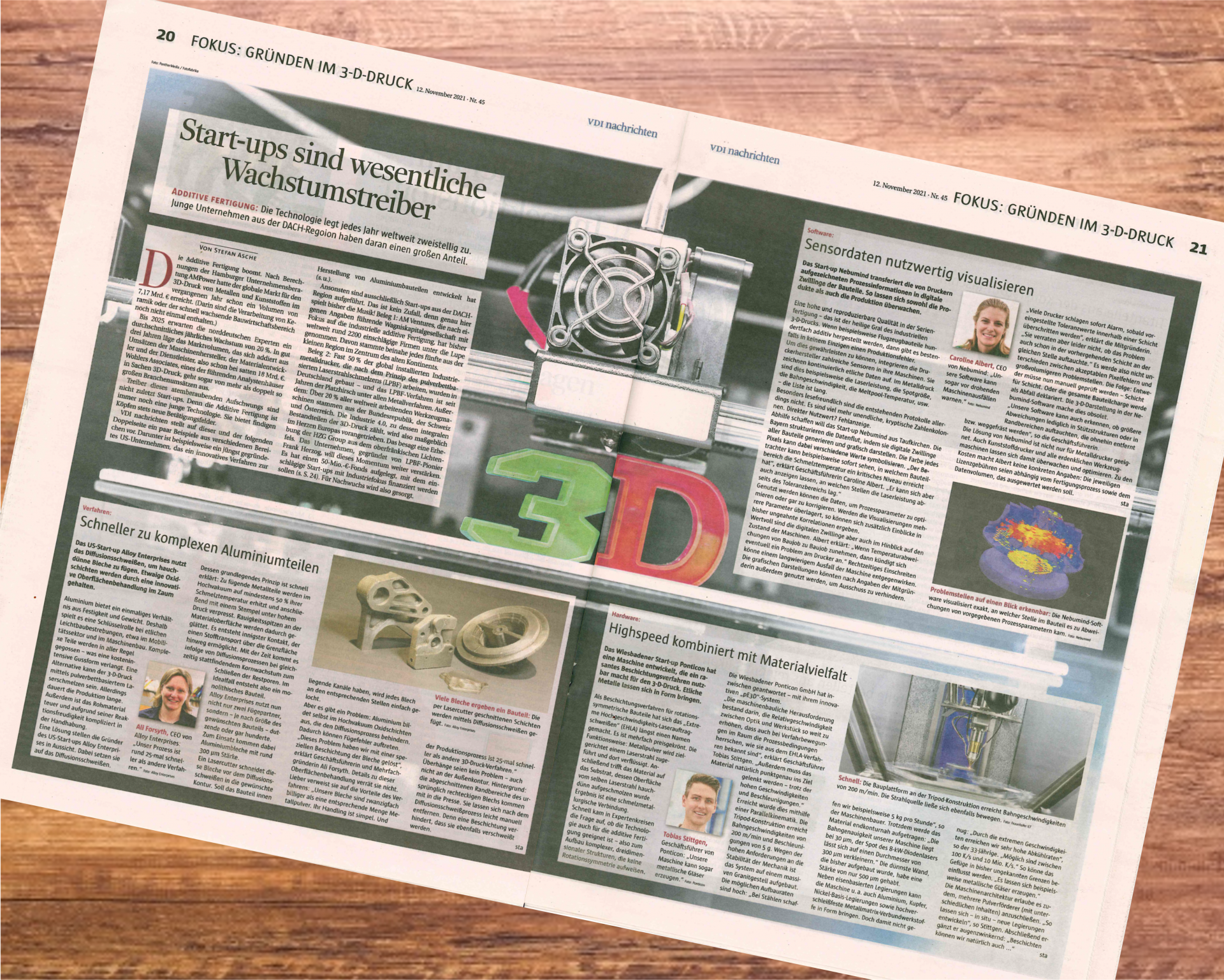 nebumind in the news again

The startup nebumind transfers process information recorded by printers into digital twins of the components. This makes it possible to monitor both products and production.

High and reproducible quality in series production – that is the holy grail of industrial 3D printing. If, for example, aircraft components are additively manufactured hundreds of times, then at best there will not be a single production defect in any of them.
To ensure this, printer manufacturers integrate numerous sensors into their machines. They continuously record a large amount of data. In metal printing, for example, these include laser power, spot size, path speed, melt pool temperature, etc. – the list is long.
However, the resulting data logs are not particularly reader-friendly. They are much more endless, cryptic columns of numbers. Direct usefulness? Not a chance.

The startup nebumind from Taufkirchen wants to remedy this. The Bavarians structure the flood of data by generating digital twins of all components and displaying them graphically. The color of each pixel can symbolize different values. „For example, the viewer can immediately see in which component area the melt pool temperature has reached a critical level,“ explains Managing Director Caroline Albert. „But he can also have it displayed in which areas the laser power was outside the tolerance range.“

The data can be used to optimize or even correct process parameters. If the visualizations of several parameters are superimposed, additional insights into previously undreamt-of correlations can be gained.
The digital twins are also valuable with regard to the condition of the machines. Albert explains, „If temperature deviations increase from build job to build job, then a problem at the printer may be on the horizon.“ Right-time intervention could counteract a protracted machine downtime, she adds.
The graphic visualization could also be used to prevent scrap, according to the co-founder. „Many printers immediately sound the alarm as soon as preset tolerance ranges are exceeded within a layer,“ the co-founder explains. „Unfortunately, however, they don’t reveal whether the problem also occurred in the same place during the previous layer.“ This means that no distinction is made between acceptable pixel defects and large-scale problem areas. As a result, either manual inspection is required – layer by layer. Or the entire batch of components is declared as waste. The 3D representation in the nebumind software makes this obsolete.
„Our software can also detect whether major deviations only appeared in supporting structures or in edge areas that are removed or milled away anyway,“ she says.

nebumind’s solution is not only suitable for metal printers. It can also be used to monitor and optimize plastic printers and all conceivable machine tools. Albert does not make any concrete statements about the costs: The respective license fees depend on the production process and the volume of data to be evaluated.

Powering process understanding and quality control in the AM industry

Join us during the panel discussion at Formnext Digital Days